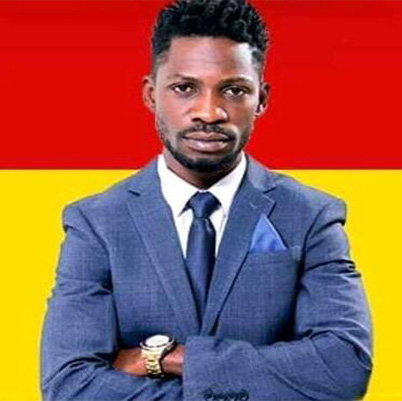 Robert was born on February 12, 1982 in Gomba District, Uganda. The 35 year old married Barbie Itungo Kyagulanyi in August 2011 and they have four children. He grew up in the Kamwookya slum in the northeast part of Kampala, Uganda's capital city.

Robert Kyagulanyi is a well known musician who’s music often advocates for ghetto residents in Uganda. He has supported several practical projects to improve conditions for the poor.

Some of Robert's Achievements

In 2012, he started a campaign to promote more regular cleaning in hospitals, sanitization, garbage management and hand washing to prevent disease. A YouTube video from September 2012 shows Bobi Wine joining Kampala mayor Erias Lukwago in cleaning up Kamwookya, the slum neighborhood where Bobi grew up.

Also in 2012, Bobi donated funds to build pit latrines and construct a drainage channel in Kisenyi II, a Kampala slum that the New Vision, a major English language daily newspaper, described as being "characterized by filth, crowded shanty structures, poor sanitation and lack of basic social facilities." The newspaper quoted Wine as explaining "I am doing this because these are my people, and no matter where I go, this will always be home."
He has also campaigned for malaria prevention, with donations to Nakasongola Health Centre, and reference to the disease in his songs.

He visited the Bundibugyo Refugee Camp in Bundibugyo District in August 2013, along with representatives from Save the Children, UNHCR, and the Red Cross to deliver funds and supplies.

The same year Bobi was appointed Parenting Ambassador by Twaweza, an NGO that focuses on education and citizen engagement in East Africa; his message in this partnership was to promote responsible parenting among his Ugandan fans. "Education is what will ultimately change the course of our country and as an artiste and a father, I believe we can all make a difference in our children’s learning," he said.

His Political Journey
In April 2017, he announced his candidacy for parliament in an upcoming by-election for the Kyaddondo East Constituency. His house to house walk campaign attracted a lot of attention both in Uganda and abroad. He won the election by a wide margin, beating two seasoned candidates: Sitenda Sebalu of the ruling National Resistance Movement party and Apollo Kantinti of the main opposition Forum for Democratic Change.

Robert Kyagulanyi has since July 11, 2017 served as the Member of Parliament representing Kyaddondo East constituency in Wakiso District, in Uganda's Central Region.