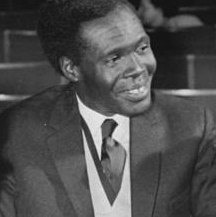 Mr. Milton Obote [Former President of Uganda] Born: December 28, 1925 at: Akoroko
EDUCATION
DESCRIPTION
Milton Obote was born on 28th December, 1925 in a village called Akoroko. His Father, Stanley Opeto was a village Chief and his mother Puliska Opeto, a house wife. Milton Obote was the 3rd born out of the 9 children.

His biggest achievement was leading Uganda to independence in 1962 from British colonial administration. It was also to Milton Obote that the very symbolically National Flag was handed at independence day on October 9th, 1962.

Tailing the nation's independence, he served as Prime Minister of Uganda from 1962 to 1966.

He also enforced some of the most notable development projects in the country during his term. His government constructed 22 big hospitals and at least 30 big secondary schools across the country.

Milton Obote's shortcomings were noticeable.  He was held responsible for much of the political and military turmoil, which characterized Uganda in the early years after independence.

By 1969, he had fallen out with more of his party members. They argued that he was becoming more autocratic and was no longer listening to them. He also got the idea of nationalizing all businesses in the country and was looking at more support from the East than Uganda’s traditional allies, the west.
During his regime, flagrant and widespread corruption emerged in the name of socialism. Food shortages elevated the prices and also his persecution of the Indian traders contributed to this rise.

Obote's regime terrorized, harassed, and tortured people. His secret police, the General service Unit, led by Obote's cousin, was responsible for many cruelties.
In 1969, there was an attempt on Obote's life. After the attempt, all opposition political parties were banned leaving Obote as an independent ruler.
By 1970, the British and Israelis that had supported Uganda for much longer had completely fallen out with him. A plot to get rid of him was then hatched. Surprisingly, the person that the coup plotters chose to replace him was none other than Idi Amin, his long standing ally. In 1971, while Obote was attending a Common Wealth Conference in Singapore, he was overthrown by Idi Amin.

In 1979, Idi Amin was ousted by Tanzanian forces assisted by Ugandan exiles. The elections in 1980 were won by Uganda's People Congress (UPC) party. However, the UPC's opposition believed that the elections were rigged. This led to the guerrilla war by Yoweri Museveni's National Resistance Army (NRA) and many others.
His second period of rule was damaged by repression and the deaths of many civilians as a result of a civil war.

On July 1985, Obote was overthrown again by his own army commanders in a military coup. The commanders were Brigadier Bazilio Olara Okello and General Tito Okello.
After his second removal from power, Obote fled to Kenya and later to Zambia. Rumor had it that he would return to Ugandan politics although he announced his intention to step down as a leader of the UPC. On 10th October, 2005 Obote died of Kidney failure in a hospital in Johannesburg, South Africa. Milton was survived by his wife Miria Obote and five children.