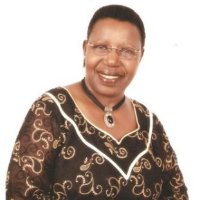 Dr Miria Matembe [Activist] Born: August 28, 1953 at: Bwiz Bwera Kashari
EDUCATION
Rutooma Primary School, Bweranyangi Girls for her O'level and to Namasagali which was known as Kamuli College then, for her A' Level. Miria soon joined Makerere University where she studied her Law Degree. She had a diploma in legal practice
DESCRIPTION

Dr Miria was born in Bwiz Bwera Kashari to Samuel and Eseza Rukooza. Her parents were peasants and had 9 children where Dr Miria was the 4th. They were five boys and four girls. The Dr is Married to Nekemia Matembe and they have 4 children.

She started her working career as a pupil state attorney in the department of DPP ministry of justice. Miria stayed there for a little while because she could not stand the injustices.

She moved on to Lecture at MUBS which was then Uganda College of Commerce.

Five years later, Miria moved to the Central Bank of Uganda(Bank Of Uganda) attached to the chartered institute of bankers.

Matembe is a former member of the Pan-African Parliament from Uganda. While serving there, she was chairperson of the Committee on Rules, Privileges and Discipline a permanent committee of the parliament.

In June 2006, she became a Reagan-Fascell Democracy Fellow with the National Endowment for Democracy.

Miria Matembe has been a strong proponent for and an advocate of women's rights in Uganda. For over two decades beginning in 1989, she was a member of Uganda’s parliament. She worked in the Ugandan government as minister for ethics and integrity from 1998 to 2003, after which time she became a member of the Pan-African Parliament representing Uganda.

In 1995, she was a member of the Constitutional Commission that created the Ugandan Constitution. She was the former chairperson of Action for Development, Uganda's leading women's advocacy organization, an organization she co-founded.

In 1990, she was the deputy general of the Pan-African Congress held in Kampala. She has been a lecturer on law and English at the Chartered Institute of Bankers, also in Kampala. A lawyer by profession, Matembe is also the author of several articles and a book, Miria Matembe: Gender, Politics, and Constitution Making in Uganda, on women in politics.

In 2011, she delivered the keynote address at The 11th Sarah Ntiro Lecture and Award held at Grand Imperial Hotel, Kampala -Uganda to those women who are either inspiring models or have worked to facilitate girl-child education at the Forum for African Women Educationalists (Fawe) organized-event and, for the disadvantaged girl-child. The main awards came in two categories; the "Woman of Distinction" award that recognized women whose activities promoted girl child education, and the Model of Excellence award that awarded women achievers who set a good example for young girls.