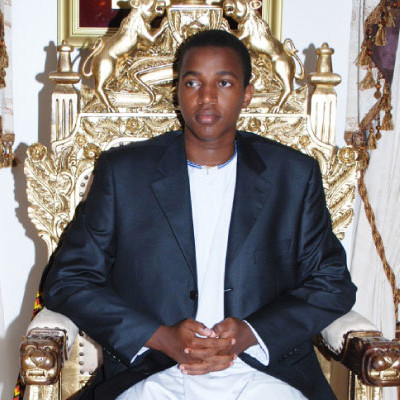 Also known as King Oyo, is the reigning Omukama (King) of Toro, in Uganda.
King Oyo was Born on 16 April, 1992.
Father:  King Patrick David Mathew Kaboyo Olimi III
Mother: Queen Best Kemigisa Kaboyo.
Oyo became king three and half years later in 1995. He ascended the throne and succeeded his father to become the 12th ruler of the 180-year-old Kingdom of Toro.
He is referred to as the Omukama, which means "King," and Rukira basaija, which means "the greatest of men." Although he is considered the sovereign leader of the Batooro, Oyo Nyimba's power is limited to cultural duties.
King Oyo was coronetted on the 17th April 2010 even when he was the “king” since 1995 after the death of his father.
The death of his father King Kaboyo in 1995 meant the crown Prince had to assume the role of King during his toddler years.
At 2 a.m. on 12 September 1995, a week after the late king's burial, the rituals to hand over the reins of power to Oyo began. They included a mock battle at the palace entrance fought between enemy forces of a "rebel" prince and the royal army, and a test of Oyo's divine right to the throne, in which the Omusuga, head of the royal clan, called on the gods to strike Oyo dead if he was not of royal blood. On passing the test, Oyo was permitted to sound the Nyalebe, a sacred Chwezi drum, as his forefathers had done. He was then blessed with the blood of a slaughtered bull and a white hen.
At 4 a.m, Oyo was crowned King amidst a jubilant crowd and entered the palace as the new ruler of the Kingdom of Toro. He was served his first meal as King, which consisted of millet dough. He sat in the lap of a virgin girl, and he swore allegiance to the Crown while lying on his side on the ground.
The cultural rituals were followed by a religious ceremony presided over by the Anglican Bishop, Eustance Kamanyire. President Museveni attended the coronation celebrations and paid tribute to the new King.

Regency
Three regents; his mother, Queen Best Kimigisha,his aunt/godmother, Princess Elizabeth Bagaaya and President Museveni were charged with overseeing King Oyo's growth into the role of King and with handling the cultural affairs of the Kingdom during the King's youth.
The late Colonel Muamar Gaddafi, the leader of Libya, was a patron of the Kingdom of Toro with close ties to the royal family. The young King Oyo named Gaddafi the "defender" of the Kingdom and invited him to attend the 6th coronation anniversary celebrations in 2001. Gaddafi had made donations to the Kingdom, helping pay for refurbishments to the Palace in Fort Portal.

Education
Oyo spent two years in London and attended preschool there. He is currently at a university in London.He went to Kampala International School Uganda and says he enjoyed art, music, math, and swimming. In October 2013, King Oyo graduated from the University of Winchester after studying there for three years.

About Toro Kingdom
Toro lies in the mid-western part of  Uganda, and Fort Portal is the biggest/ major town.
The people of Toro, known as the  Batoro, speak a language referred to as Lutoro. Batoro comprise 3.2 percent of the 35.5 million people of Uganda (2012 estimate).
The Kingdom was  ruled by the Babiito dynasty, whose history dates as far back as the 14th century. According to oral history, Prince Olimi Kaboyo Kasunsunkwanzi, son of the King of Bunyoro, annexed the southern part of his father's Kingdom in 1822 and founded what is known as Toro today.

Uganda and Kingdoms
Uganda was composed of sovereign kingdoms during the pre-colonial times. These kingdoms were headed by chiefs and clan leaders. Most societies in Uganda were not as organised like Bunyoro,Toro, Ankole and the Buganda Kingdoms that were led by kings. The other societies were most led by clan leaders and chiefs.
Milton Obote of the Nationalist Movement in the 1966s abolished the political powers of the traditional leaders. He had feared for their collaboration and the effects that came along with the british colonial authorities.
As a result, the 1970s and 1980s were characterised by political instability and civil unrest, which threatened the cultural institutions. Many of the leaders like Kabaka Mutesa of Buganda and Omukama Patrick Kaboyo of Toro were forced into exile to escape the regime of terror. However in the year 1993,  President Yoweri Kaguta Museveni, amended the constitution and reinstated the kingdoms.
The kingdoms would never enjoy the sovereignty it had in pre-colonial times, but they would be instrumental in mobilizing the country towards social and economic recovery.